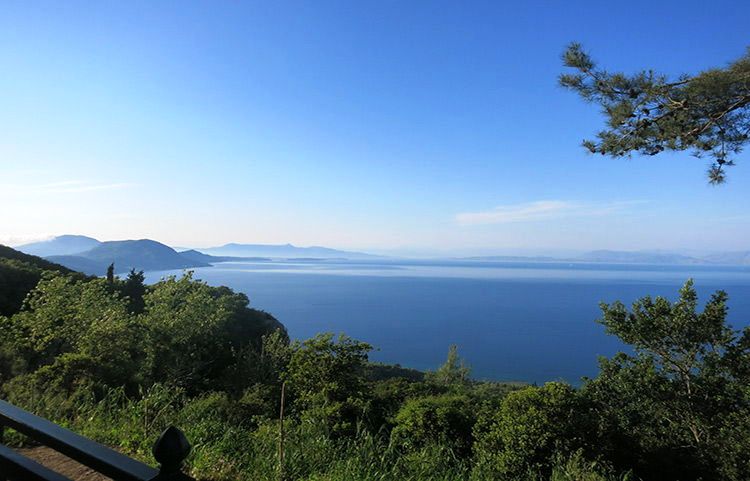 The island is elongated and sickle-shaped. In the north, the maximum width from the east to west is 21 km., gradually dwindling as we move south until the island is only 7 km. Wide at its southernmost extremity. The coastline of Corfu is widely varied. In the east, the land slopes gently down to charming little bays and coves. The largest bays on the east side are those of Corfu town and Lefkimmi, while on the west, where the coastline is steep and rocky, there are tiny inlets, many of them of the greatest beauty.

All around Corfu are islets, including Vido and Lazareto in the bay of Corfu town, and the famous Pontikonisi close to the Chalkiopoulou lagoon. Most of the ground on Corfu is low-lying, though there are three ranges of moderately high hills. The highest peak, Mt Pantokratoras (906m.), is in the north- east of the island, with the peaks of Vistonas and Araklis further to the west.

A lower range whose highest peak is Mt Agyii Deka (576m.) runs cross-wise across the center of the island, with the Ropa valley further to the north an the low hills of Chlomos (330m.) in a southerly direction. Close to this is Lake Korission, with a length of 12 km. And a maximum width of 1,300 m., separated from the sea by a narrow spit of sand. There are few rivers, almost all of which run dry during the summer. The largest of the is the Mesongi river, which rises on Mt Ayii Deka and flows into the sea in the bay of Corfu Town.

Find exclusive offers wich apply only through our official site.